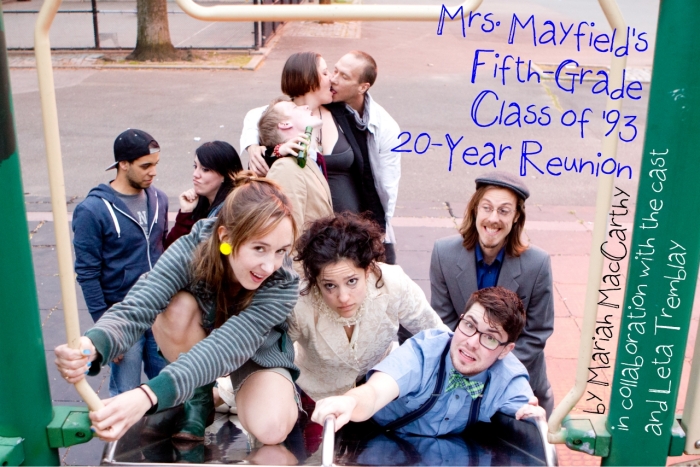 Mrs. Mayfield… is part play, part party, in which a group of former classmates (now all pushing thirty) reunite for a night of drinks and nostalgia. As people revert to their more childish sides, Lord of the Flies-style, what follows is a battle for affection, power, and ownership of memories. Also: nineties music!

Audience members are fellow guests at the party, with the freedom to wander the space (Sleep No More-style), and have complete control over how interactive the experience is for them: a red nametag means, “Don’t talk to me,” while a green nametag indicates, “Yes, interact with me.”

“I really can’t recommend this play enough — and at $18 it’s an absolute bargain — as it will likely be a highlight of your theatrical year. 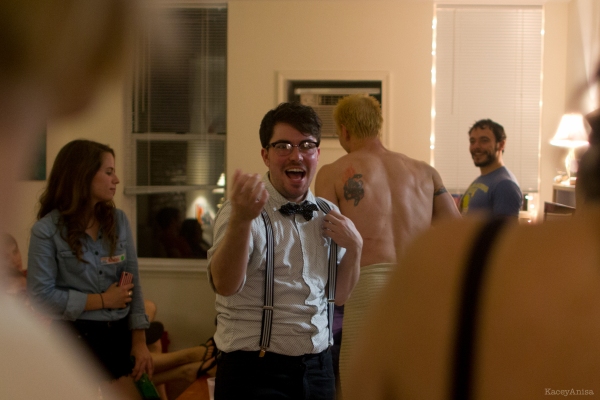 Grab a few friends, hop on the N train and go see this immersive play where you can voyeuristically intrude on one of the most ridiculous and absurd house parties you’ll ever go to…Just like at the end of your real school reunions, you’ll be happy you went…It’s a great experience, as you can completely ignore social protocol and shove your nose in conversations you find interesting, and leave mid-sentence once you’ve gotten bored. If only all house parties had these rules!…It’s pretty hilarious…The experience of being a close-up spectator in this Astoria apartment with such a bunch of misfits is wonderful, delightful and will give you plenty to chat about on the potentially long subway ride back home.”
–Theatre Is Easy

“Not too many times have I had the opportunity to attend a play in which as much input is expected from the audience as is given by the actors. Playwright Mariah MacCarthy’s off-off Broadway play Mrs. Mayfield’s Fifth-Grade Class of ’93 20-Year Reunion goes beyond interactive. The total immersion one experiences at the apartment in Queens where the play takes place may seem off-putting and awkward at first, but the result is a surprising sense of having been in a place transformed by theatre. 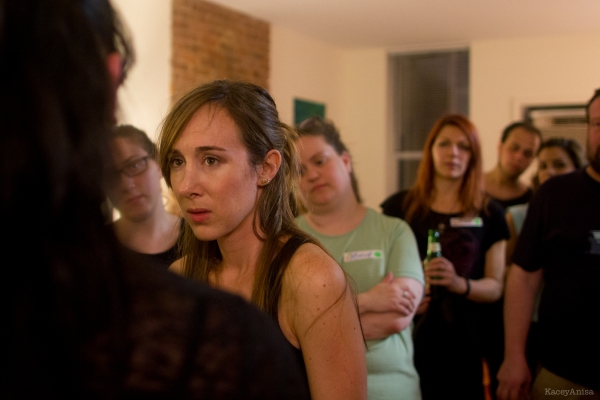 The truly memorable performances came from Lindsey Austen, who plays Robin, Amanda’s best friend and former bullied fifth grader at the hands of Crystal (formerly Chris) played by the energetic Lauren Hennessy. Jesse Geguzis plays the sweet, but not-all-there Jamie and does an excellent job interacting with the audience, asking questions and playing Jenga while never letting up his painfully honest and superficially innocent persona.

Mrs. Mayfield is one of the most fun theatre experiences I’ve ever had…leaves the audience with the sense that the whole world truly is a stage worth experiencing.”
–Exeunt Magazine 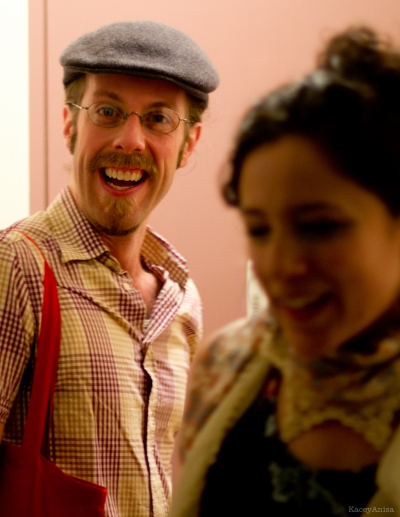 “It was the most “real to life” theatrical experience I’ve ever seen and it raised the bar for what theater can be…If you wish your theatre-going experience was more like a house party and less like a sacramental ceremony this show is for you…The environment was so engaging…I appreciated the intimately cozy quarters because it made it easy to catch the various sub-plots…That is not too say that I didn’t get lost into meaningful improvised conversations with the cast members, because I certainly did. The freedom of those moments is what made the work exciting…Riddled with hilariously awkward moments.”
–Show Business Weekly

“Director Leta Tremblay…does an excellent job managing its fluid timing and structure. Ms. MacCarthy is well on her way to developing a reputation for nuanced, unflinching depictions of characters still too often sidelined on the stage and elsewhere…Some crazy stuff happens. More, in fact, than at any party I’ve ever been to (at least that I can remember)…[Lauren] Hennessy gives one of the most engaging and seamless performances of the night, along with [Nicki] Miller and [Lindsey] Austen as [former] roommates Amanda and Robin.”
–New York Theatre Review 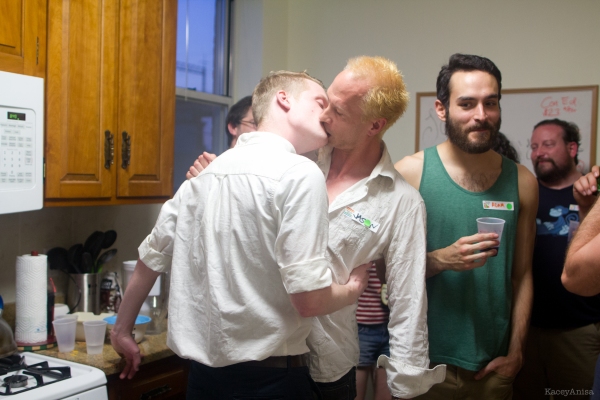 “The company is lovely…All of the actors have worked hard on credible portraits of their people, with particularly impressive work from the sweet-faced Jesse Geguzis and Lindsey Austen, the amusingly wound-up Elizabeth Seldin, and the brooding Jordan Tierney. I would’ve especially liked more time with Tierney’s character Joey…His restrained melancholy intrigued me so fully that I skipped a louder scene across the room so I could stay near the ‘coloring table’ as Tierney and Geguzis played out a quiet reminiscence about someone dear to them. Like all dinner parties, Mrs. Mayfield works best as a communal effort, and in this case I took a surprising amount of pleasure from traveling about the space with my fellow audience members, every one a total stranger.”
–nytheatre.com 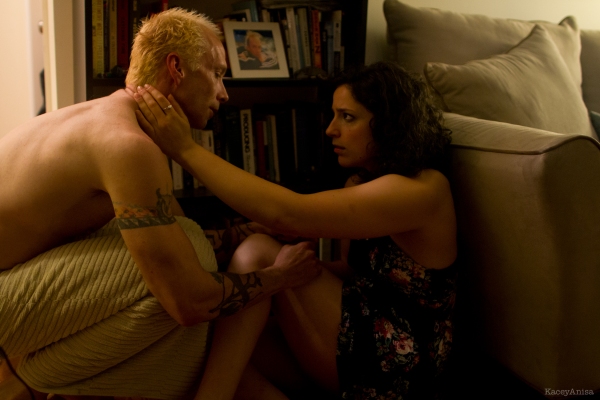 “You’re at this precipice [in fifth grade]…we start discovering “coolness” in a more concrete, high-stakes way, and we become crueler in our pursuit of that coolness.”
–Interview with Mayfield playwright Mariah MacCarthy on Culturadar

“I had people making out on my couch and dead in the bathroom and screaming and it was just awesome.”
–Mayfield director Leta Tremblay interviews Mariah on Theaterspeak

“I’ve learned that the old theatrical rules do not necessarily apply to an immersive play experience like this. I’ve learned that there is no way to really predict how an audience will respond. I’ve learned that sometimes you just need to take big giant risks and trust that your collaborators will not only be there to catch you, but that they are holding your hand tightly and jumping off the cliff right alongside you. I’ve learned that spending a whole rehearsal talking about traumatic childhood memories is sometimes the most productive use of time. I’ve learned that playfulness and an open mind are essential to community created work. I’ve learned how to make a mean pot of chili. And I’ve learned that a group choreographed 5th grade dance number is one of the most magical gifts in the world.”
–Mayfield playwright Mariah MacCarthy interviews Leta on Theaterspeak 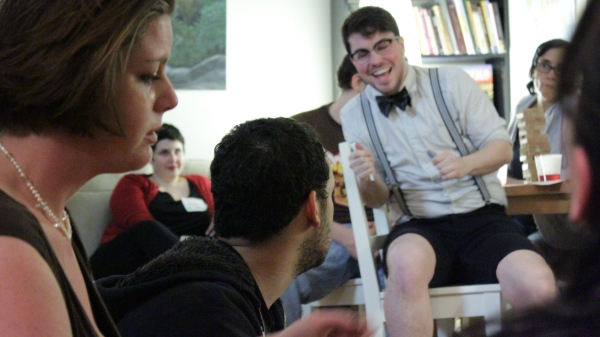 “Even if your show only plays for twelve performances in a fifty-seat theater, that’s 600 people whose minds and hearts you can reach and touch. If you get those people to think about whatever is important to you, then yes, you can change those people, and that’s how you change society. In fact, you not only can, you should. That doesn’t mean every play should be “political,” but remember that having an audience is a gift and a unique opportunity to shift the world in whatever direction you’d like.”
–Interview with Mayfield playwright Mariah MacCarthy on nytheatre.com

“Cyclops would become fixated on one plot line and confused when multiple conversations happen at once. Cupid would be that audience member that can’t help but meddle in the action. Paul Bunyan would hang out at the drink table and eat all the chile. And the Easter Bunny would probably be distracting and hand out candy. So Cupid. Cupid would enjoy Mrs. Mayfield the most.”
–Interview with Mayfield director Leta Tremblay on nytheatre.com 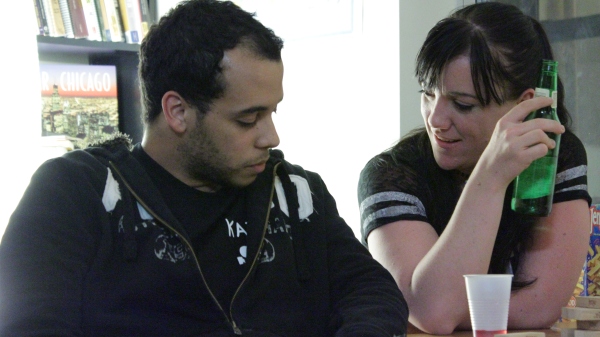 All other photos by Kacey Stamats unless otherwise indicated.